Bit of a mixed week this week.  After a good Cranial Osteopathy appointment on Friday, I felt rotten when I woke on Saturday.  Nauseous and tired.  I'm sure this was once again linked to my monthly cycle which just seems to exasperate my CFS symptoms.  I felt better by Monday and then had a good Perrin apppointment on Tuesday.  I came away from the appointment with two back exercises to do using my newly purchased back roller. 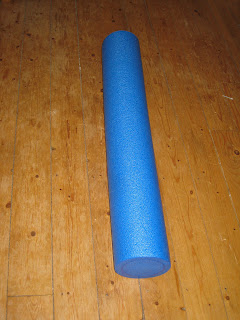 These new back exercises are now incorporated in my daily routine.

Had a lovely yoga class on Wednesday.  I am so close to trying a proper full blown yoga class, not sure what's stopping me really.  It's probably that I don't want to try and then find I can't do it, that I'm not ready for it yet.  It's all to do with state of mind.  At the moment my mind thinks my body is pretty strong (relatively - against where it has been), so I don't want to show it otherwise by doing something I'm not ready for.  At some point I am just going to have to try it and see.

On Thursday evening I took DD2 to the city to see a show.  It was a 45 minute drive away.  I didn't know the venue and when we got there I discovered that there was no seating and that we would be stood for the whole show.  This wouldn't have been so bad except that the start of the show was delayed by 1 hour 15 minutes due to the bad weather.  This delay meant that I stood for much longer than would have been the case, about three hours all told.  For about an hour of that time I was doing battle with an ape of a man who was pushing against me trying to create a space where there wasn't one, for his girlfriend to stand in.  I sat on an uncomfortable step for the final half hour of the show.  My legs were tired, my back ached and I still had the drive home to do.  We got home at 11.30pm where I promptly fell into bed.  I felt rough on Friday morning, but recovered as the day went on which was useful as I had another longish drive to do Friday afternoon.  These events still do have an effect on my body, but I'm sure there is no doubt that they do not make me feel as bad as they used to and that I recover from them much more quickly.
Posted by Beauts at 18:08

Beauts
I'm pretty upbeat and laid back, but I'm trying to recover from ME/CFS which I've had since August 2009 and it is very fustrating. I have a fantastic family who are really supportive. This blog is my own record of the search for recovery, so I can see how far I have come (a long way already)and contemplate a way forward.

Books I'm reading at the moment